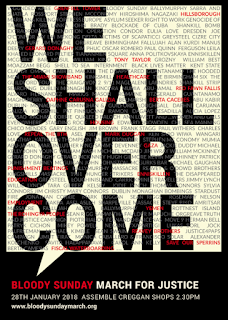 As with previous years division has again reared its ugly head in Derry in the run up to the annual Bloody Sunday March for Justice.  The issues which caused the most controversy this year were the design / content of the march poster and the lack of accountability from the organising committee responsible for the march.

How can a poster cause controversy? Well the poster as you can see has the words ‘We Shall Over Come’ in large letters but the controversial element stems from the inclusion of a range of names and campaign issues the majority of which have no relevance to Bloody Sunday.


The publication of names and campaigns on a poster was always going to be problematic because of some of the following reasons:

·         The poster would not accommodate the names of all those who died during the troubles therefore someone was always going to feel that the name of their loved one should have been listed. In the case of the English family from the city who lost two family members during the troubles, one son Gary who was murdered by the British Army in 1981 was listed whereas his brother IRA volunteer Charles English who died in 1985 was not. How the inclusion of one son and not the other was acceptable is beyond me. Common sense was clearly missing here given the names of other IRA volunteers were listed. It is worth noting that Charles English joined the ranks of the IRA after his brother was murdered, similar to many others who joined the IRA after Bloody Sunday.

·         The Brady family from Strabane raised issue with poster and the fact that they were not consulted about the inclusion of John’s name. John Brady was a former republican prisoner who died in suspicious circumstances whilst being held at the Strand Road PSNI station in 2009.

·         The inclusion of Ranger William Best a member of the British Army from Derry alongside victims of state violence and Republicans who lost their lives was a bone of contention for many republicans contradicting the position taken by members of the march committee who recently staged a protest at the Museum of Free Derry. A protest in opposition to the names of their loved ones being listed alongside state forces who were killed during the Free Derry period (1968-1972).

·         The inclusion of internee Tony Taylor on the same poster as Mozamm Begg when Tony’s wife refused to sit on a fringe event platform with Mr Begg last year due to his connection with M15 should have been blatantly obvious to the organisers.

·         The pro-life lobbyists were always going to raise issue with the inclusion of the Repeal the 8th Amendment given that they too have a contingent on the march each year.  Therefore the banner was not inclusive.

It would seem from the information on the poster that the organisers had absolutely no concept of hypocrisy, inclusiveness or contemporary Irish history and the sensitivities around it, well either that or they chose to ignore them. As pointed out above the inclusion of names of loved ones was an issue that members of the organising committee raised with the Bloody Sunday Trust regarding the Museum of Free Derry. So, at some level the organisers had to consider the possibility of others raising the same objection. Yet when they did rather than trying to rectify the situation or address concerns they blocked people on social media, ignored and in some cases demonised them.  These actions were not only dismissive of the individuals and groupings in question, but of the very notion of democracy, openness, transparency and accountability.


What struck me as strange was the refusal of this committee to explain the rationale behind the poster or account for things like the committee membership. Granted they are not a public body but they are a group who rely on public support, financially and otherwise, so for that reason an explanation was the least people deserved including those who supported the continuation of the march long before the organising committee was formed. People may have not liked or agreed with their rationale, but at least concerns could have been addressed.


However, numerous references have been made recently to the march being used as a vehicle to transport and promote People Before Profit policies. Whether you agree with this or not this is something the organising committee themselves have been deeply critical of Sinn Fein and the Bloody Sunday Trust for.  An organising committee which has called for accountability on numerous occasions from the Bloody Sunday Trust who in contrast publish their committee membership and in fairness to them have accounted for their decisions when questioned. I have had first-hand experience of this having accompanied a representative of the March for Justice Committee (Kate Nash) and former Chief Steward Vincent Coyle to meet with members of the Trust in 2014 over a development proposal.


There can be a certain sadness when history repeats itself for all the wrong reasons. On the evening following last year’s march, I published a blog highlighting how I had been accused by a few of the March for Justice Committee’s supportive rent a mob of trying to destroy the march, this despite my public support for the march.  The rantings of the main mud thrower at that time were not only absolute lies but part of a concerted attempt by this person and a few lackies to vilify and felon set me, and sadly despite exposing them for what they are their efforts did not end there.

This year I once again found myself in the frame, this time accused of trying to destroy and control the march. The individual responsible was an advertised speaker at one of the Bloody Sunday annual events on the subject of punishment attacks and brutal justice. Considering this persons history of online abuse and online Kangaroo courts and character assassination he was the ideal speaker, although he should've been speaking from a perpetrators perspective as I'm sure he would agree violence takes many forms. 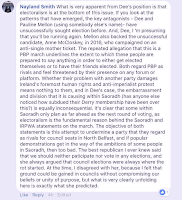 Using the online alias ‘Nayland Smith’, Dr Deaglan O’Donaghaile accused Belfast Republican Dee Fennell, (with whom I have no connection, no offence Dee) and I of being main antagonists in alleged attempts to destroy this year’s march.  This as Deaglan’s father Michael was on social media accusing me of having the profile of a member of a Scottish flute band, of being local man Seamus Crawley and any number of other people on social media who would dare to have a different viewpoint to his. Trust me if I had the amount of free time these clowns think I have, I wouldn’t be spending it on social media! 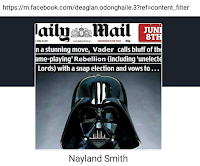 At this point the words of Dr Deaglan spring to mind from an article he penned on ‘punishment attacks’ for the Belfast Telegraph:


“Deliberately engineered to appear vague and its indeterminate quality is intended to cultivate a collective response along the lines of: "Well, he/she must have done something.”

As usual with Dr. Deaglan, he seems to confuse whatever fiction is rattling around in his head for reality. Maybe Dr. Deaglan should heed his own words? After all his words above easily describe his accusatory attacks upon me.


Anyway, back to the main and more important issue.  The current Bloody Sunday march is so far removed from what it was on the 40th anniversary were the issues prevalent in 72 were centre stage on the platform. On that year you had the significance of the 40th anniversary coupled with the sense of optimism that the march was returning to community ownership, today however is very different.

People raising concerns today are being accused of trying to take control of and destroy the march, people are abused for voicing an opinion, or in my case for not even commenting. Yet if people are attacked and accused of having agendas for questioning something how can it be the ‘people’s march' as it has often been referred to? As a note to the march organisers; the people are the march anything else is the mere submission of an 11/1 form to the PSNI/NI Parade’s Commission and the related responsibility. And a further note to the organisers; when three members of your 12-strong committee are being publicly singled out for questioning or criticism over a committee decision the very least you owe them is public support and if you can’t manage that then you may want to rethink the position you have been gifted. Despite my differences with some of those ‘organisers’ I think it is horrendous that they have been left to face the backlash as others sit on the sidelines.


Where this goes now when the dust has settled is something that needs serious consideration and will require open, inclusive discussion without recrimination.  In practice and belief, I have always supported the need for the Bloody Sunday March as it provides a platform to highlight injustice and can serve as a litmus test of public feeling on a range of social issues, one that political parties pay heed to. I might not agree with every issue or cause highlighted however, I support the right of people to promote their cause but common sense is needed in that the main banner must be neutral.


As the saying goes there are bigger fish to fry, this is one march, in one year and no barrier is insurmountable if the will is there. I for one would hope the will is there and the issues of this year can be overcome, however I do share the reservations of many who refuse to be on the streets marching to the tune of one political party.